Skip to content
Homepage / Finance / Bubble or new reality: what is happening with the stock market

Despite the worsening problems in the global economy, stock markets continue to be close to their historical highs and clearly overheated quotes are in no hurry to fall. Is it worth waiting for the next collapse of the stock market bubble and what projects are invested in by those who expect to make money on the new technological order?

The current situation in the world’s largest stock markets clearly looks like the biggest stock market bubble in history. Thus, the S&P 500 index exceeded 4,700 points in November, which is almost 2 times higher than at the time of the “covid bottom” in the spring of last year. Moreover, this situation is clearly not embarrassing for investors: the “fear index” VIX, according to investing.com, is near the lows and amounts to 16.53 points. For comparison, in the spring of 2020, it exceeded 53 points (it was worse only in the fall of 2008). 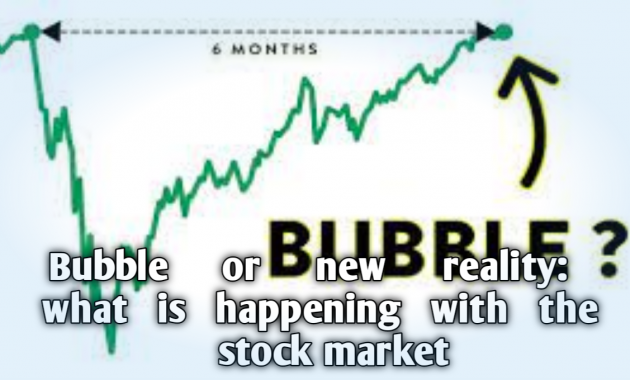 The founder of the School of Practical Investing, Fyodor Sidorov, believes that a collapse in the stock market will occur, since any system functions this way – natural, social, economic or financial. And now, at the moment when the world is moving into a new, “sixth” technological order, this physically cannot happen without destroying the old one.

“If we talk about the stock market, the collapse will happen sooner or later, it’s just that the bubble is still being inflated, and to such a size that when it bursts, it will be a crisis of “historic proportions”, as US Treasury Secretary Janet Yellen said, talking about the ceiling problem public debt,” Sidorov is sure.

Natalya Malykh, head of the Finam shares analysis department, on the contrary, believes that there is no bubble in the market now, and it still has potential for growth. Unless, of course, the scenario of stagflation, that is, stagnation of economic growth with high inflation, is not realized.

“Loose monetary policy in the US certainly creates a foundation for the stock market, but we should also not forget about the strong dynamics of corporate profits and the potential for payouts to shareholders. According to the S&P 500, in particular, corporate profits are expected to increase by 64% in 2021 to a record level, and the profits of the Moscow Exchange Index companies are expected to soar, according to forecasts, by 2.6 times year on year,” explains Natalia Malykh.

SberPro Media’s interlocutor explains the current situation with the S&P 500 index by the fact that although the assessment by its multiples exceeds the average value over the past 10 years, in fact this is due not only to record low interest rates, but also to the increase in the weight of technology companies in the index, which traditionally are traded with high multipliers: if in 2010 the share of the technology sector was 19%, by now it has grown to 28%.

Look to the future

What can an investor do in the current situation, who expects to earn money in the process of transition to a new economic order? Fedor Sidorov is sure to choose industries and companies that should become the main beneficiaries of this process. And in this sense, you need to understand that the foundations of the new economy will be artificial intelligence, more and more people going online, technologies for extending active longevity and health, as well as the synthesis of technologies and a variety of areas: medicine, biology, genetic engineering, agriculture, and so on. .

“Accordingly, in the near future, companies that are already developing and implementing projects of the future will acquire more and more weight on the market. These are the well-known Moderna, Pfizer, Astra Zeneca,” says Sidorov. “At the same time, sectors related to raw materials will grow, whose reserves are depleted in the world, but are urgently needed for a technological breakthrough, in particular for energy based on renewable energy sources.”

According to the interlocutor of SberPro Media, NextEra Energy Partners (USA), Azure Power Global (India), Sky Solar Holdings (USA) are of interest in the field of wind and solar energy. But creating more solar fields around the world requires a lot of silver, and the world’s reserves of this metal were 70% depleted by the year 2000. Accordingly, the main beneficiaries in the near future will be companies that are engaged in the exploration and production of silver on an industrial scale, such as First Majestic Silver Corp. (AG), Pan American Silver Corp. (PAAS), Endeavor Silver Corp. (EXK).

The desire of mankind to reduce harmful emissions, the development of robotics and electric vehicles will require the solution of another important problem – the disposal of lithium batteries. Until now, the problem has not been solved, but companies such as Tesla Inc., Redwood Materials, Li-Cycle Corp.

The company that solves the problem will be the first in a technological breakthrough in electric vehicles, which will naturally push the entire industry. This means that other commodities that are used in the production of electric vehicles will also be in high demand: aluminum, lithium, nickel, and so on. Rising prices for them will be translated into growing revenues, profits and dividends of mining companies. You can bet on this trend through the shares of Norilsk Nickel, Rusal, Rio Tinto, Vale, Anglo American, Freeport-McMoRan, Southern Copper, Antofagasta and BHP Group.

“For example, Bill Gates has been buying up agricultural land for many years not only in the US, but also in other countries, and these lands are used to grow the simplest and most popular crops: potatoes, soybeans, rapeseed, and beans. And here’s why: the growth of the world’s population and pollution of nature are reducing the area of ​​agricultural land around the world at a rapid pace. According  to UN forecasts , in the very near future, the issue of shortage of the most common foodstuffs will affect not only poor, but also developed countries. The value of land, which makes it possible to grow food, is constantly growing,” says Sidorov.

Berkshire Hathaway Vice Chairman Charlie Munger’s corporation has released transaction data for the third quarter of 2021. During this time, the Daily Journal made just one deal on the stock market: it bought 136,740 shares of Alibaba, increasing its stake in the shares of the Chinese Internet giant by 82.7%. Thus, the total number of shares in the company’s portfolio reached approximately 20% of all investments in the Daily Journal. This decision was made against the backdrop of a 50% drop in shares, writes Seeking Alpha. At the same time, Kathy Wood’s investment company Ark Invest acquired 59,000 shares of Amazon’s Chinese counterpart JD.com for about $4.7 million. This may indicate that the shares of Chinese companies that have fallen in price have good potential and are attractive to large investors.

“In the new waves of the pandemic, we see an upward trend in gold, as in the first and second. Gold is rising, its price is increasing. We see that the share price and profit on the shares of Polyus Gold, Polymetal, Barrick Gold, Newmont Gold, Lenzolota, Petropavlovsk are growing. It can be seen that profits from gold funds, SPDR, S&P Gold are growing, ”says the expert.

One of the consequences of the coronavirus was record low bond rates in the world at the level of 1-1.6% and, as a result, record prices for the bonds themselves, notes Sergey Pirogov, founder of Invest Heroes. Realizing that COVID-19 will be followed by an increase in demand and wages, and then inflation, some investors decided not to suffer losses on the fall of bonds and found an alternative tool with understandable payouts – real estate. One of the founders of this trend is Blackstone, the world’s largest alternative investment management company with $649 billion in assets under management. In late 2020 and early 2021, she  began investingin two directions: in residential real estate for rent (in the United States, the cost of houses has increased, and not everyone can afford a mortgage, especially with unemployment of 6% and an increase in mortgage rates after 2020) and commercial real estate in narrow, developing niches – medicine , logistics, data centers. The logic of such a decision is clear: in a world where inflation has increased (4-5% for the summer of 2021 in the United States with a bond yield of 1.5-3% for a five-year horizon), it is logical to receive a rental income of 4-6% from investments, as well as benefit from rising property values. The strategy is already bearing fruit: for example, according  to Zillow, rental rates in the housing market in September 2021 increased by 12.9% year-on-year.