In this article, I propose to talk about money, or rather about hard money, which at all times was gold.

In recent decades, the world financial system has been based on floating exchange rates. It is believed that the system of floating currencies most fully corresponds to the current world economic order. This system is dynamic, which allows you to quickly respond to fluctuations in the economy, influencing through monetary policy. The main role is played by the US dollar and the Federal Reserve System (FRS).

The American currency gained a dominant role in the middle of the 20th century due to the fact that the United States occupied a leading position in the world economy with a share of more than half of world GDP. This was especially important in the period after World War II, when many countries lay in ruins.

In the 1990s, the destruction of the Soviet economy led to an even greater peg of all settlements and regional economies to the US dollar, strengthening the monocentric economic system. The end of the 20th century can be described as the peak of the power of the United States, which controlled almost all financial and trade flows with the help of dollar settlements. All settlements went through American counterparty banks that collected commissions from the global cash flow. The US dollar exchange rate and the behavior of the Fed determined the economic situation in the world. Nearly all countries have bought US bonds, allowing the US to issue a world-class issue. 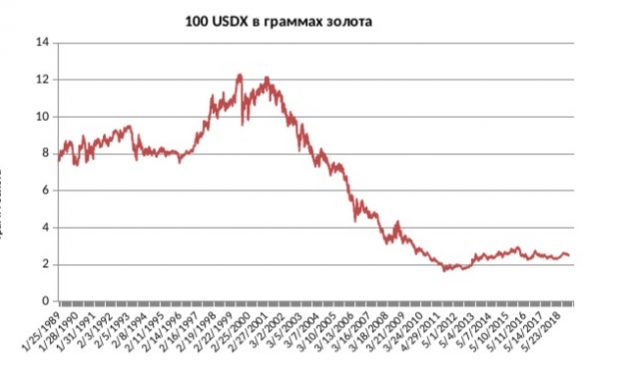 However, this situation did not last long. In 1999, the single European currency euro was put into circulation, and the rise of the eurozone and the European Union began. China began to develop powerfully, which literally in 20 years became the factory of the world and took second place in terms of economic volume, catching up with the United States faster and faster.

In connection with the possible loss of control over the world, the United States began to actively use sanctions pressure, including a possible ban on dollar settlements, as well as introducing more and more control measures over the owners of money and payment counterparties. In response to these actions, since 2013, the Central Banks of various countries began to increasingly ignore the purchase of US bonds.

A forgotten insurance asset, gold, is gradually entering the world stage. This metal has long played the role of hard money in the world economy and until the middle of the last century, it reliably served as the standard of world money. Gold does not have an issuer, allows you to maintain the anonymity of payments and counterparties of the transaction, is well stored, transported and, in general, has no properties to lose value.

The most striking example was the Central Bank of the Russian Federation, which has been actively buying gold since 2005.

And if from 1993 to 2005 the share of gold in the reserves of the Russian Federation fell from 57% to 2%, then in the last decade there has been a reverse process with a simultaneous increase in the volume of international reserves. Thus, the sanctions process applied by the United States to Russia stimulated an increase in the share of gold in reserves, which, as of January 1, 2019, amounted to 18.5%.

In addition, all over the world there is a transfer of payments into regional currencies, which are increasingly being carried out through the platforms of regional Central Banks (in general, I don’t know why, but everyone writes Central Banks with a capital letter). This reduces the risk of blocking payments by US regulatory authorities. In the middle of last year, a tacit transition of the financial system from a single-currency to a multi-currency was announced, which at the same time assigns the role of a balancing asset to gold.

However, the US dollar and the Fed still continue to play a large role in the world’s financial system, as well as influence the state of regional economies through dollar-denominated prices and interest rate policies.

In many states, inflation periodically occurs, sometimes developing into hyperinflation. Argentina and Venezuela are the latest countries to have recently experienced this devastating event. In addition, many emerging markets, including India, Turkey and Russia, suffered from currency depreciation in August last year.

There is an export of inflation from the economic core to the periphery, which puts pressure on the economic growth of emerging markets, as well as on politicians and economists who make decisions in these countries. At the same time, it seems that the US dollar is constantly strengthening, and the power of the American economy is growing.

However, if we evaluate the value of the US dollar in gold, then a large-scale devaluation of the American currency that occurred from 2002 to 2011 is revealed, when the value of 100 US dollars fell from 12 to 2 grams of gold. Thus, the American dollar suffered the same fate as many fiat currencies before it, also called “paper” currencies.

The law of economics says that any issued paper currencies inevitably depreciate over time relative to gold, which at all times remains the standard of world money.

This happens due to political greed, as well as the economic unethicalness of politicians, under whose pressure the Central Banks issue too much paper money that is not backed by anything.

At present, the situation in the world economy and politics is gradually reaching the limit, after which it is necessary to make fundamental changes in the financial system, which will inevitably entail a change in political and economic leaders. Partial changes are already being made, but so far the general public does not see the consequences of the changes.

The main outcome of the ongoing events will be the gradual return of the world to gold as the standard of money.

The largest “gold” exchanges in the world

A large-scale project in the history of the gold market was the launch in mid-2014 of the Shanghai Gold Exchange (SGE), which determines the price of spot gold in yuan. This is of great importance when supplying gold to China. Also, within the framework of the Shanghai Futures Exchange (SHFE), trading in futures contracts for gold in yuan was launched.

Significant factors for the gold market

Over the past 20 years, a huge physical gold market has been created in China, in which the entire population of the country is involved at one level or another. The idea of ​​investing in gold, buying jewelry and hoarding jewelry fits very well into the Asian mentality, in connection with which the volume of gold consumption in the country has grown to 950 tons per year, metal imports have grown to 500 tons. China also came out on top in the world in gold production, increasing production from 107 tons in 2001 to 430 tons in 2018.

The second significant factor for the gold market is the demand for it in India. This metal has played a huge role in Indian society since ancient times: it is used as collateral for bank loans, as well as for the accumulation of savings by Indian households. Indian consumers attach a special role to gold jewelry, consuming about 600 tons of metal per year. The total consumption of gold in the country is estimated at 750 tons per year, which is mainly provided by imports.

Russia is the third largest gold producer in the world after China and Australia. According to the Union of Gold Producers, gold production in Russia in 2018 amounted to about 330 tons, of which about 280 tons were purchased by the Central Bank of the Russian Federation. Gold for Russia, as mentioned above, is an attractive means of accumulating foreign exchange reserves.

The Central Bank is the main buyer of gold in the domestic market, the metal is not imported, and exports depend on the state of the world market. The purchase of gold from the domestic market is carried out for additional emission, which makes it possible to stimulate the Russian economy without increasing inflation. The growth of the gold mining industry also leads to the development of remote regions, which is especially important for the Far Eastern Federal District. Exchange trading in gold in Russia is possible within the framework of the Moscow Exchange, where settled futures contracts for gold are traded, quoted in US dollars per ounce of the metal and closely correlated with the world price. Recently, the exchange also organized trading in a deliverable futures contract for gold, but trading activity in this contract is limited by the VAT levied on the supply of bullion. However,

In addition, a Russian investor can trade in ETF funds, which contain gold or shares of gold mining companies. The most famous gold ETFs are SPDR Gold Trust (GLD) and iShares Gold Trust (IAU), which follow the value of the physical metal, which makes investing in these assets low-risk and helps protect against inflation. Both funds are listed on the NYSE and are available to qualified investors.

Also available for widespread investment in physical gold are gold coins. Among the most suitable for the Russian investor is the investment coin “George the Victorious”, issued by the Bank of Russia. The purchase of gold investment coins is available through commercial banks and coin dealers, which is reliable, convenient and profitable, since the sale of coins is not subject to VAT.

Can’t wait to put our tips into action? Open an account with Otkritie Broker – here you can trade both independently and under the guidance of professionals. And if you have any questions during the process, ask them through the feedback form. We will try to answer as detailed as possible!