Skip to content
Homepage / Insurance / Venture after the pandemic: more money than startups

In early 2020, UK-based online conferencing startup Hopin had seven employees and was valued at $38 million. The pandemic has changed everything. Against the background of a sharp demand for services for remote work, the company attracted  $ 1 billion in investments in just 1.5 years . And its estimate has grown to 7.75 billion dollars by 200 times. 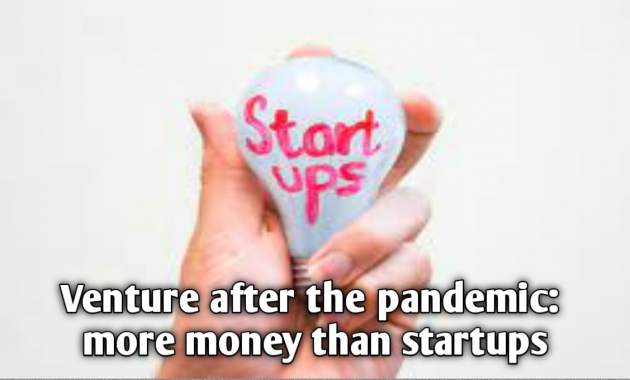 Is this a special case or a reflection of the growing trend of “demand for start-ups”? How did the venture capital market react to the pandemic in general and where are investors looking?

The pandemic has led to a restructuring of consumption patterns, daily life and doing business. The demand for services for organizing remote work has grown exponentially. For example, Zoom recorded a 326 % increase in revenue in 2020, leaving behind competitors – the Google Meet, Skype, Slack and Microsoft Teams platforms. The suspension of offline trading increased the sales of online stores in Russia by 108% to 721 billion rubles, while the global volume grew by more than  27% . Although the catering industry has dipped in 2020  , the express grocery delivery market has  more than quadrupled. For example, in 2020, the number of orders for Samokat increased by 18 times, and for Sbermarket, by  14.3 times.

The pandemic has accelerated the development of technology and has become a springboard for IT companies. “The changing environment allows startups to take off and become leaders very quickly. This is a phenomenon that opens up opportunities during crises and accelerates breakthroughs and changes,” says Alexander Chachava, Managing Partner at LETA Capital. Denis Efremov, principal of the Fort Ross Ventures venture fund, agrees with him: “Now is a good time to create something. Online has become the “new normal” for any startups, including Russian ones. I think this is a good opportunity to enter the world markets.”

The venture capital market quickly reacts to changes: the volume of investments and the size of checks are growing – demand exceeds supply. The boom is confirmed by the co-founder of the venture company The Untitled Konstantin Sinyushin. In his opinion, this trend is due to the fact that traditional conservative investment instruments are in long-term stagnation, while others are excessively volatile. The increased demand, according to him, is mainly manifested in very late transactions with large Russian young technology companies and small ones that entered the world market with Russian founders, the expert notes.

Significant deals include the startup Ecwid, a platform for creating an online store without the participation of developers. The project was founded in 2009 by Ruslan Fazlyev, a programmer from Ulyanovsk. The entrepreneur spent nine months and $500,000 of personal funds to launch the first version . Initially, the project team consisted of only three people. Two years after the launch, the Runa Capital venture capital fund invested $1.5 million in the company. After this transaction, the startup opened an office in California and gained a foothold in the international market. By the way, Fazlyev became one of the heroes of Yuri Dud’s film about Silicon Valley “How the IT capital of the world works.” By 2020, Ecwid has attracted more than 48 million dollars of investments from Russian and foreign funds. In the first half of 2021, its revenue increased 1.5 times to $20 million. And this summer, Canadian e-commerce platform Lightspeed bought it for $500 million. Fazlyev  said the deal will help the parties join forces to democratize retail for independent businesses.

Ecwid is a bright, but not the only Russian startup that is in demand among investors. At  the end of 2020, the entire Russian venture capital market doubled from RUB 11.6 billion to RUB 21.9 billion (however, some players consider this estimate too high).

If we consider individual segments, then the volume of foreign investment increased the most – from 204.3 million rubles to 312.8 million rubles, calculated in Inc. This growth is due to several reasons: the appreciation of the dollar and a number of large transactions. For example, Miro, a remote work platform founded by Perm natives Andrei Khusid and Oleg Shardin, has raised $50 million  (3.7 billion rubles) from ICONIQ Capital, which manages the capital of Mark Zuckerberg, Jack Dorsey and other leaders of large technology companies.

The corporate sector takes the second place – its volume is 5.2 billion rubles. One of the successful Russian exits last year was the deal between the 2GIS service and Sberbank: the bank bought 75% of the company for 14.3 billion rubles. Also, a joint venture between Mail.ru Group and Sberbank, O2O Holding, acquired  a blocking stake in Samokat — 75.6% — and  84.7%  in Kitchens on the District.

Why do corporations need startups?

The pace of market development is forcing even successful corporations to look for new niches and sources of revenue, introduce innovations, and master more flexible working methods. Fort Ross Ventures’ Yefremov said some large companies are investing in information rights because they want to be on the cutting edge of technology innovation. Corporations have the opportunity to immerse themselves in technology, launch project pilots and follow trends. Someone does this by creating corporate venture funds, someone by investing in market funds, and someone invests directly. This is about 15-27% per year.

Corporate venture investors have their own characteristics. Sinyushin notes that due to the long planning horizon, it is difficult for them to recognize the potential of early teams and integrate them into their company. Therefore, they prefer the later stages to invest in and take over startups.

The global venture capital market in the second half of 2020 broke an all-time record: in July-September , it grew by 40% compared to the second quarter of 2019. In Asia – by three quarters, in Europe – by almost a third. The amount of funding also increased, with a total increase of $  259 billion. Vitaly Polekhin, President of the International Organization of Investors INVESTORO , believes that the best startups get more money, and venture investors do not want to miss the trend of increased activity.

The main figures of international venture

223 transactions were registered for more than $100 million.

1500 companies were taken over by corporations, the most active – Apple, Microsoft, Cisco.

Major exit on the global market:

In the first quarter of 2020, large corporate players favored promising late-stage startups. Such activity is associated with a growing demand for building joint or partner corporate ecosystems. Digital health is at the center of corporate investment . In addition, at the beginning of 2020, startups in the field of delivery and logistics, fintech and cloud computing, as well as robotics and vehicles were popular .

What’s next for the market

How long will the hype last? According to Denis Efremov of Fort Ross Ventures, we should expect hysteresis (the inability of some macroeconomic variables to return to their original values ​​after the cause is eliminated). “There will be a rollback, but not to the starting point. Since the entire venture capital market is about time, we (venture capitalists) hope that the crisis will help keep the boom online, ”the expert comments. Efremov singles out cloud technologies, digital medicine, financial technologies, technologies at the intersection of operations and infrastructure, as well as solutions based on open source code among promising industries in terms of investment. “A completely separate world is biotechnologies and space technologies, as well as other deep technologies that can give humanity a technological impetus in 5-10 years,”

e-grocery is one of the fastest growing sub-segments of e-commerce that investors are also betting on.

According to SberCIB Investment Research analysts, it will increase its share in retail trade by an average of 0.5-0.7 percentage points per year. After the turnover shown in 2020 (153 billion rubles), they expect a turnover of 321 billion rubles at the end of the current year. In 2026, the figure will increase by 7 times compared to 2020 and will reach 1.19 trillion rubles. By then, approximately 4.6% of all FMCG purchases in our country will be made online.

Read more in the material: ” How e-grocery is developing in Russia: the market today, risks and prospects “